Let’s try something a little different.

I have lots of photos, and even a few short videos, of one of my favorite rides: Azay-le-Rideau to Villandry to Usse and back to Azay. I call it the Three Castle Cruise. So, instead of me going on and on about how to turn right onto the D39 to the D16 and then over to the …

Up and over the hill, down into the town of Villandry, along the Cher River, walked thru the gate and into the gardens and…

After a few hours in Villandry (bring your lunch and eat in the gardens), rode over to Brehemont and did a little loop around this peninsula filled with farms and flowers. And took this video along a quiet, residential street…

Then followed a bike path/small road west along the Cher, made a left turn, looked up and saw this (wait for it…)

From here, headed back to Azay. It was a 44-mile ride total, not much climbing. Here it is on MapMyRide.

Here’s the link to the blog post on my 1st Favorite Ride post: The Gorges de la Nesque in Provence

And, for more on Biking the Loire, check out my eBook on this very same subject (coincidence? I don’t think so).

Don’t you hate when this happens…

My butt balm and sunscreen tubes are on the counter in the bathroom, next to each other, and, every once in a while … I absentmindedly begin to apply them before a ride … and suddenly realize I just put sunblock on my butt (or butt balm on my face and arms).

Do I have to take a shower right now?

Anyway, 10 days till I depart for my French bike trip, and I’m trying to minimize the amount of stuff I’m bringing with me. An entire tube of butt balm and sunblock is way too extravagant, and heavy. 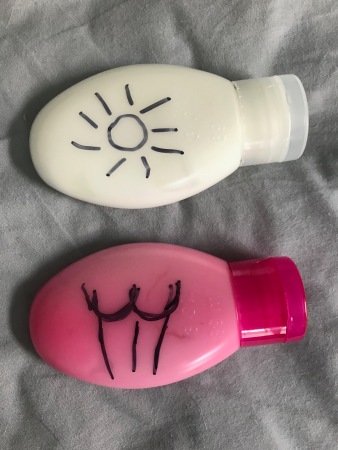 So, went to Target, to the travel section, where they sell miniature versions of most toiletries, and bought two small, empty plastic bottles.

Squeezed some sunscreen into one … and butt balm into the other. And labelled them with appropriate identifying diagrams to avoid confusion.

It was 1993: Our honeymoon French bike trip … we pedal into the town of Bayeux in Normandy and…

We arrived in the middle of the town’s annual Medieval Festival. The streets were filled with all kinds of scary guys on stilts. And thousands of people. So Susan, who was very much into photography (especially B&W) back then, started shooting away.

And got this guy…

Here’s what I wrote in my journal on July 3, 1993: “There were all sorts of booths and everyone was in costume and then there were all these monsters on stilts who led a big show with firecrackers, gnomes, jugglers and fire breathers. It was supposed to symbolize the battle between good and evil.”

A gnome is a diminutive spirit in Renaissance magic and alchemy. Not sure when they were co-opted for gardens.

Here’s something else I wrote that day in my journal, and had completely forgotten all about: “Today we had a big fight. Susan got mad at me and then I got mad at her and things got worse. Of course, it was all my fault. It took all day, but we made up.”

I think all the Renaissance magic and alchemy helped end the fight. Not to mention the gnomes.

At first it felt like a tickle. On my eye.

And then it felt like a bolt of lightning shooting through my right eyeball and into deep my brain. Followed by another bolt of even more powerful lightning. Followed by lots of cursing.

I swiped at my sunglasses, knocking them off my face and onto the road. Something, some sort of large, black insect flew away. I swerved and almost lost my balance, but kept pedaling. And then stopped.

It hurt. Like holy bloody hell. And seemed to get worse, as the pain radiated in ever-expanding circles until it filled my entire head.

This happened on July 8, 2007. We were in Maussane-les-Alpilles (in Provence, a little east of Arles).

First things first, I told myself. I have to find my sunglasses, as they’re prescription sunglasses. And I can’t really see without them. And I need to see in order to cycle my way back to Maussane. Walked back and forth, along the road, where I thought they may have landed, squinting like George in that episode of Seinfeld where he did all the squinting.

Couldn’t find them. Damn. What do I do now? Kind of need them to see. And my regular glasses are back at the hotel. Then I saw a flash of something reflecting in the sun. Under some weeds.

It was my sunglasses. I can see again. Although my left eye seemed to be pulsating.

Made my way back to the hotel, where Susan was waiting by the pool.

“What … how did you … what the … does it hurt?” she said, kind of startled. And worried. Seems like my eye was already pretty much swollen shut.

I told her what happened.

Susan got some glacon (ice) from the guy at the hotel, which (especially back then) was kind of a big deal. Glacon seems to be a rare and precious commodity in France. And the hotter it is, and this was a pretty hot day, the more rare and precious it becomes.

Iced down my eye, took a few Ibuprofen and Benadryl (Susan’s a nurse and brings lots of meds on our bike trips), and a nap. Awoke and my eye was pretty much swollen shut and the entire right side of my face was all bloated up … and angry.

We walked down the street … and people stared. I was hideous. Children ran.

Walked into a restaurant and the woman at the front stared in horror. She didn’t speak much English, we didn’t speak much French, but we were able to explain to her that some sort of large (grande), black (noir) insect (insect?) had stung the hell out of my face.

And then, the kind woman brought me some ice.

September 21, 1985: My first bike ride in France. Figured this would be a good way to start this blog. Here’s the story…

I was an aviation writer back then, covering the Paris Air Show for the third time. I know: Tough assignment! When it was over, decided it was time to see some of the beautiful French countryside that Van Gough and Monet were so obsessed with.

Settled on the Loire Valley, boarded the train to Blois and, on the way, read something in my Let’s Go Francetravel book that changed my life: “Unquestionably the best way to see this fecund valley is by bike. Distances are relatively short, and the terrain is flat and lush.”

Done. I’m renting a bike when I get to Blois. At the place Let’s Gorecommended. The only problem was, I had no idea what the word fecund meant. Is it a French word? English? Italian? It’s gotta be a good thing, right?

After polishing off three chocolate croissants, one of the greatest foods ever invented and the French version of an energy bar, off I went in search of Atelier Cycles. At the back of the shop, working on a bike, wearing a yellow, one-piece mechanic’s suit that made him look like a giant banana, was Monsieur Atelier.

Using sign language, smiles and my limited French vocabulary, was able to explain to him that I wanted to rent a bike … I mean velo … for a week. “Ah, oui,” Monsieur Atelier said, followed by a bunch of French words I didn’t understand. 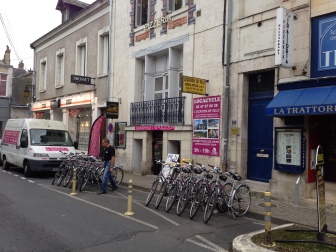 He picked out a yellow road bike that matched his outfit and had “Atelier Cycles” written on both sides of the top tube. Yellow must be his favorite color.

The bike seemed perfect – and even had a rack on the back to strap on my knapsack. Damn, hadn’t thought about how to carry my stuff until that very moment.

Monsieur Atelier began pointing at various parts of the yellow bike, talking faster and faster. He was very passionate about velos. I kept nodding, faster and faster, even though I had no idea what he was talking about. He took a bunch of stuff out of the little pouch under the seat and started explaining and demonstrating what to do with the tools. He even pantomimed how to fix a flat tire, something else I hadn’t considered.

Holy crap, that would totally suck, since I had no idea how to fix one.

Finally, Monsieur Atelier wheeled the bike out of the shop and onto the street. I hopped on, ready to start pedaling my way through the fecund Loire Valley.

Or so I thought…

I’d never ridden a bike with straps on the pedals. Did they even have straps on the pedals of bikes in the United States back in 1985? I never saw them before. It looked so easy, something every 7-year-old French kid can do. But, no matter how hard I tried, and I tried really hard, I couldn’t manage to turn the one pedal and get my second foot into the damn strap. The more I tried, the more frustrated I got. My feet felt huge, like giant clown feet and the pedal straps seemed to get smaller and smaller the more I tried to get my second foot in.

On the third or fourth try, I fell … and Monsieur Atelier did his best to hold back the laughter. My right hand was a little scratched up, but other than that I was fine, more angry and embarrassed than hurt.

Finally, after a few more futile efforts, Monsieur Atelier motioned for me to get off the bike. He wheeled it back into the shop as I stood there, feeling like a complete and utter idiot.

“Great,” I mumbled to myself. “He thinks I’m too stupid to be trusted with his nice, yellow bike. Now what the hell am I going to do? You can’t go on a bike ride without a bike. Can you? No, you can’t. That’s called hiking.”

Monsieur Atelier emerged a few minutes later from the shop with the bike – minus the pedal straps. “Voila,” he said, followed by a bunch of French words I didn’t understand.

I got on the bike, started pedaling, turned to wave goodbye, wobbled and nearly lost my balance, but quickly righted myself, and pedaled off into the Loire. Think I saw Monsieur Atelier cross himself a couple times. Wonder if it was for me – or his bike?

Five days and about 200 miles later, my thighs were screaming in agony, my butt was sore and rashy red … but I was totally hooked on traveling by bike. Loved the freedom, the adventure, the route planning, the exploring of each and every town I stayed in and the amazing, fecundness of France. Fecund, by the way, means full of flowers, plants and flora. I saw the castles at Chambord and Chenonceaux (it goes across a river!), the amazing gardens at Villandry. Saw endless fields of sunflowers, vineyards and 500-year old churches. Even climbed a few hills. Barely.

I’ve now biked in France 12 times, a total of 12,000-plus miles … and counting. This blog is my attempt to share the joys of biking in France … and sell a few of my Biking France eBooks (sorry, to be so blatant, but hey, this is what I do for a living. It’s not like the croissants and bike rentals are free).

Thanks for reading … enjoy the ride.