“This is not possible,” I mumbled in desperation. “This can’t possibly be happening. It just can’t.”

Oh, but it was … and I blame my sister because, well, it was totally her fault.

It was 2013: The start of our Loire bike trip. We had spent a few days in Paris, then it was on to Blois, where Susan and I were gonna ride for a few days. Susan was then heading home (Columbus, Ohio), while I got to stay, ride and gather information and photos for my first eBook: Biking the Loire. Thank you Susan.

We’d made arrangements with my sister, Debra, who lives with her family in England, to ship my bike to Blois. It was the bike – a men’s road bike (you know, curved handlebars and a straight-across top tube) – we bought during our 2007 French bike trip. We also bought a women’s hybrid bike (flat handlebars and an angled, woman’s style top tube) for Susan. We met Deb and family in Southern France back in 2007, hung out for a few days, and had a great time. They packed our bikes into their SUV and drove home to England (yes I know, you can’t drive all the way from France to England … they took the ferry across the channel).

And there our bikes sat, in their garage, gathering dust and cobwebs, for several years.

So, I asked Deb to take my bike to the local bike shop, have it tuned up, packed up in a box and shipped to our hotel in Blois.

“I did it, it’s on the way to Blois,” Deb emailed a few days before we flew to Paris.

That’s a relief. Thank you, Deb.

We arrived in Blois, and the guy at the desk told me there was a big box in the garage with my name on it.

That’s a relief. Thank you, Deb.

The plan was for me to ride my old friend, and we’d rent a bike for Susan. Her old bike, from 2007, was kind of a crappy bike. And she was only riding for 2 days.

Went to the garage, started opening the box … and … it was Susan’s bike. You know, the too-small, non-road-bike bike. The women’s bike. The hybrid. It wasn’t my bike. How is this possible? They’re totally different bikes. Different sizes and …

Think I went into shock. A little bit. I just stared and stared at the bike in the box, not believing or comprehending what I was seeing. Thinking that somehow, some way, if I kept unpacking the box, my bike would be in there.

Decided to assemble the bike … and ride it. What choice did I have?

And, too make matters worse, which is always possible, I couldn’t get the damn front tire back onto the fork. Somehow, someway, in the packing or shipping, or by osmosis, the front fork had been ever so slightly smooshed together … and the tire wouldn’t fit back in no matter how much I tried … or cursed. And I cursed a lot! Some of it in French.

Thank goodness the guy at the hotel desk (the owner) is a former Tour de France rider. 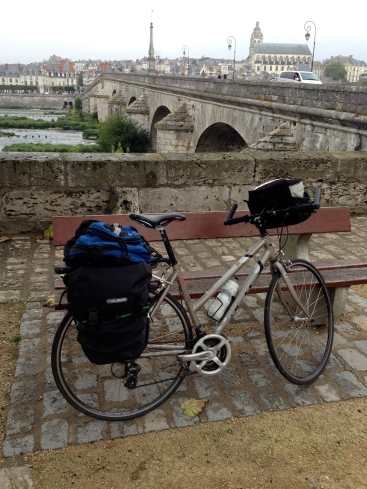 And so we pulled and pulled, each of us pulling on one of the forks, somehow stretching it a millimeter further apart, just enough to squeeze in the wheel.

“Voila,” Roland said after we got the wheel on and it seemed to spin properly. The French say “voila” whenever they accomplish something.

If I’ve learned one thing over the years on bike trips, it’s that you must always adapt and overcome the inevitable mechanical, logistical, geographic and psychological problems you will inevitably encounter. This was a big one.

And so, I rode this too-small, women’s bike for the next two weeks. It was manageable. Barely. Although my knees began to hurt on Day Three. And then my back.

At the end of the trip, I left the damn bike at the hotel in Saumur. In the garage. Never wanted to see – or ride – it again.

PS: I eventually forgave Deb. Mostly! And, in retrospect, this made for a good story … and blog post. Wouldn’t have been half as interesting if she’d sent the right bike. So, Deb … here’s my belated thank you.

One thought on “Bike Bashing In Blois (BBIB)”