My “epic” bike adventure in Bordeaux and Provence is coming to an end.

And so, Steve: What have you learned this past month and 1,100 miles?

*Well, for one thing: If you ever find yourself drinking a beer directly from the can while eating sausage in bed, you may want to rethink the entire situation.

*A mountain, even the Ventoux … can shrink.

Here’s my summit photo from 2010, when it was snowing at the top of the Ventoux in late September…

And here’s a photo (by Susan) last week…

How did the Ventoux lose three meters?

And, are the missing three meters from the top, where the climbing is really tough … or closer to the bottom where it’s a lot easier?

I think they’re from the bottom, as the top seemed as difficult as ever.

And, speaking (and writing) of the Ventoux, I’m always amazed at how many people are there, climbing it on their bikes. Hundreds. A thousand or more on July and August weekends. The entire town of Bedoin revolves around cycling and cyclists. Not sure if there’s another town quite like it anywhere.

*I think I may just like the wine here in Provence better than in Bordeaux. I know, this could be considered scandalous and could get me banned from future bike trips in France … but the truth, or at least my wine truth, must be told.

And, we (Susan is with me on this), seem to love the wine from the region west of Mount Ventoux. From the villages of: Seguret, Sablet, Rasteau, Cairanne, Gigondas and Vacqueyras. You can get a nice bottle for 7 or 8 Euros at the store, and for maybe 20 Euros (and up) at a restaurant. They’re just so darn drinkable.

*It’s important, no, make that vital, to do a thorough reconnaissance of your hotel room before you check out. You never know what you may have left in the shower, hanging out the window or by the bed. I’ve lost a lot of stuff over the years.

*You do NOT have the priority when you enter a traffic circle on your bike … or in your car. They’e really serious about that over here … so proceed accordingly. And carefully.

*I also learned the French really like for their T-shirts to have American (not English, but American) words and expressions and made-up companies emblazoned on them. And, they don’t really care what the words are, as long as they’re American words.

Here’s an example I saw on someone’s T-shirt: “You’re Shit And You Know You Are”

I have no idea if the guy wearing this, A French guy I saw in the Bordeaux region, had any idea what these words meant. Or if he was talking to me. Hey, he better not have been!

A French woman’s T-shirt read: “I Woke Up Looking Like This”

I’m certain she didn’t know what this meant, as she was, how can I put this nicely: Not looking her best.

New York, and especially Brooklyn, seem to be the most popular words on the T-shirts.

*The pizza here is really good. And, a pizza, a salad and some red wine is the perfect post-ride meal. Or the perfect meal even on those days when you don’t ride. 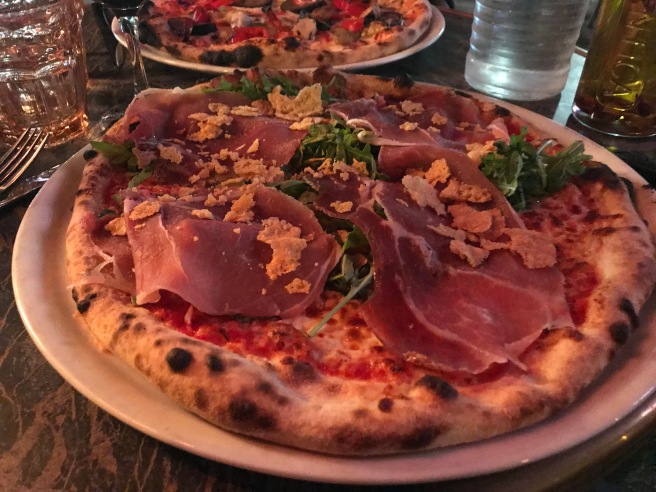 One thing though: The topping choices are limited and seem to be the same wherever you go. Enough already with the Four Seasons and the Reine.

Here’s a pizza tip: Always get the one with the mergeuz. Mergeuz is the best. It comes on the Oriental.

*This place (Provence) is jam packed with medieval villages. They’re everywhere. On top of every damn hill. Seriously. And, after visiting about a dozen, they’re all starting to blend together in my brain. So many stones. So many winding streets and arches and ramparts.

And yet, they’re all pretty darn amazing. Today, we hiked from our hotel in Maussane les Alpilles (where the sausage and bed faux pas may have occurred) to Les Baux, which just might be the most medievalist of all the medieval villages.

Here’s another one of Les Baux from Susan, who has an artful eye … and sore legs after our 12K hike today. 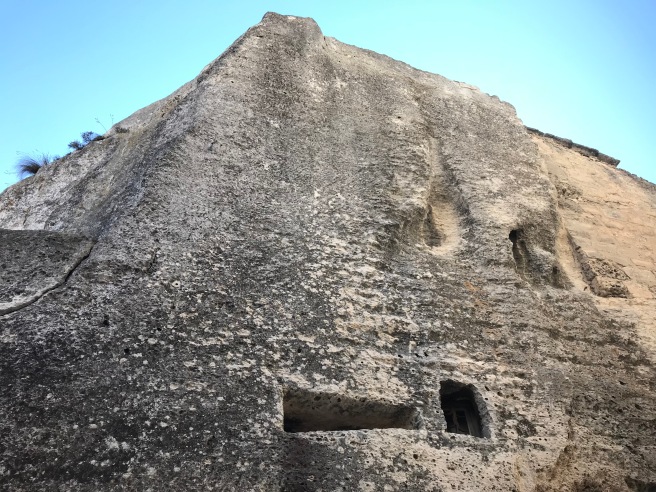 *The Roman influence here remains strong, with lots and lots of architectural remnants. Including Pont Julien, which was built in 300 BC. That’s right: BC! That kind of blows my mind that a bridge more than 2,000 years old is still standing.

Until about 10 years ago, you could still drive your car across Pont Julien. Not any more, but you can still ride your bike across it … or do a headstand beneath it.