I’ve seen the future of cycling and bike touring … and I like it.

I’m in Arcachon, a beach-resort town on the Atlantic Ocean about 30 miles west of Bordeaux. And there are bike paths everywhere. I’m not exaggerating. Take a look at this if you don’t believe me… 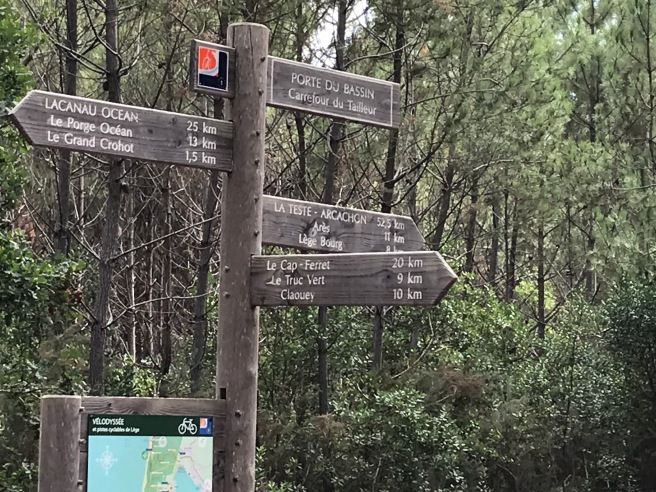 Yesterday: I rode from Lacanau-Ocean to Cap Ferret and took the ferry across the Bassin D’Arcachon to Arcachon. Almost entirely on great bike paths.

Today: Headed south, past an incredible mountain of sand (I’ll get to this later), and then continued south to Biscarrosse-Plage, and back. Again, almost entirely on bike paths.

There were lots and lots of other people on bikes. Many were loaded up with panniers and other gear, including camping stuff. There are campgrounds everywhere here. I likee camping … but not on a bike trip. I need a hot shower and a real bed after riding 50 or so miles. But I do admire those who bike and camp. That takes real fortitude.

This concept of long trails that connect popular places along the coast, and inland, is the future. If you build them, the cyclists will come … and ride.

I wouldn’t want to rode entirely on bike paths, as you’d miss the villages and farms and other stuff you see on the rural roads. But having them as an option, especially along the ocean, is great.

This next photo wasn’t taken on the bike path … it’s my hotel room here at the Grand Atlantic Hotel here in Arcachon.

Can you tell this is a beach hotel?

And speaking of beach hotels: Being the cleaning person at one is a really tough job. There’s sand everywhere and in everything. And thousands more grains of it come in every day. It never ends. And the more you clean the more sand there seems to be and …

Anyway, the Grand Atlantic is quite nice and very reasonably priced, but a little far from the center of town. Oh well, you can’t have everything.

I would love to see the artwork in all the other rooms.

OK, back to the bike paths.

So, for the most part, you ride parallel to the ocean, a little inland … and get glimpses of the sea from time to time through the pine trees. Every few miles, there’s an access road to a plage. You can only get so far on the paved road/path … and have to hike the rest of the way. Here’s the road to one of the plages.

Near Biscarrosse-Plage I saw this… 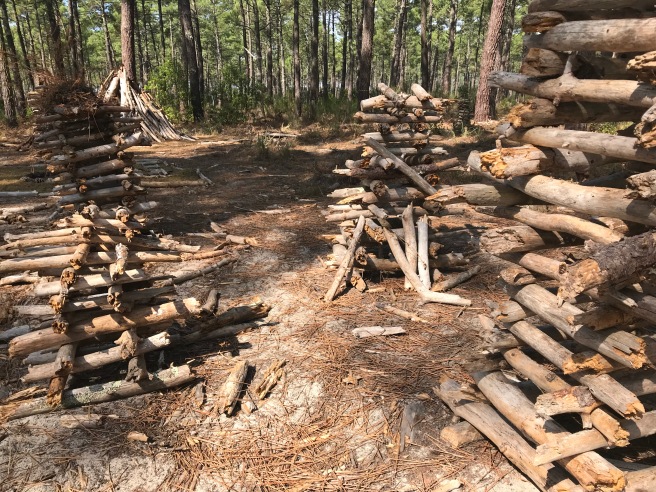 It was sort of in the middle of nowhere, just off the path … several stick stacks. I know stone stacks and stone stacking are a popular thing, and you see them on hiking trails, but this is the first I’ve seen or heard of stick stacking.

And then there was this…

The Dune du Pilat … the tallest sand dune in Europe.

It’s immense, a sand mountain along the water about 4 or 5 miles south of Arcachon. You have to hike a bit, through the woods and past lots and lots of cafes and restaurants … and then, there it is. Rising majestically up and up, entirely made of sand.

You climb up the stairs, or up the side of the sand mountain, to the top. And take it all in. It stretches south for a few miles and some people seemed to be hiking to the end and back. The Dune du Pilat is definitely one of the highlights of my 2018 Biking France Adventure … and the fact that it’s entirely natural, all Mother Nature, makes it a must see.