I learned this today at the Musee Champollion here in Figeac, where there’s not much else to do on a rainy day. It’s a museum on the history of writing, named in honor of Jean-Francis Champollion. He grew up in the house where the museum is located … and went on to decipher the hieroglyphics from 1810 to 1822.

I now feel a lot of pressure to make this an extra-fascinating blog post (assuming the previous ones were ordinarily-fascinating). Then again, writing is hard and writing well is even harder more better! At the museum, there’s a quote from an 11th Century monk on writing: “It dulls the eyesight, makes one stoop, hurts the ribs, the stomach and gives one backache; the whole body is filled with loathing.”

It seems that when monks are allowed to talk, they have plenty to say. And a lot of pent-up complaints to express.

Champollion died in 1832 at the young age of 41. I think I know what killed him: the hieroglyphics. FYI: Spellcheck knows the correct spelling of Champollion! If only the monks had spellcheck back in the 11th Century, their lives would have been so much easier. Unless they were burned at the stake for possessing such magical technology.

Anyway, today’s blog is all about the difference between the routes along the Cele River Vallee and the Lot River Vallee, and which one is better.

I’m gonna stick to the most traveled/touristy sections: The Cele route from near St Cirq (where the river starts) to Figeac; the Lot route from St Cirq to Cahors. Here’s my Michelin map, with the two different routes highlighted in pink, the official marker color of French cyclists!

And the winner is: The Lot. Not by a lot.

Why? There’s a little more variety, a couple of climbs, and you can ride on both sides of the river the whole way. You’re mostly level with the Lot, but sometimes you’re up high with a view down. Like this one…

But, to get the full Lot/Cele experience, here’s what I suggest (and what I did):

Day 1: From my hotel just outside St. Cirq , I rode up to St Cirq, then down and down, back to the river, a little further west. This is where the famous Chemin de Halage (the walkway carved into the bottom of the cliffs) are located. 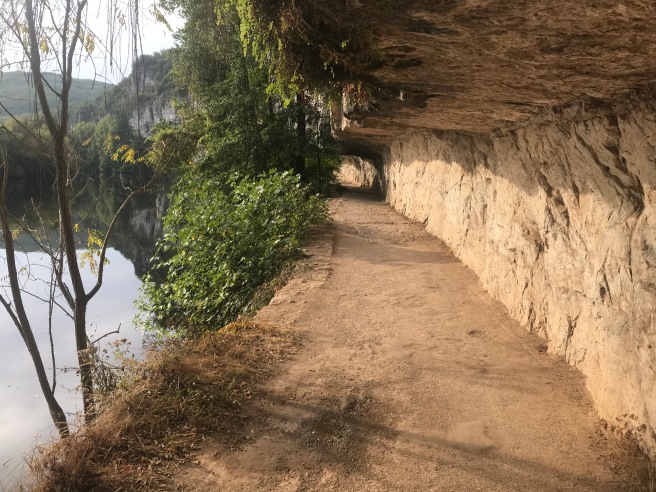 Cross the river at Bouziers and a kilometer later is the start (or end?) of the Cele. I rode the first 20 Ks to the town of Marchilhac along the D41. Great road. Quiet, with cliffs on your left and the river and valley to your right. Marchillac is a nice little town … with a small grocery. This is always important. 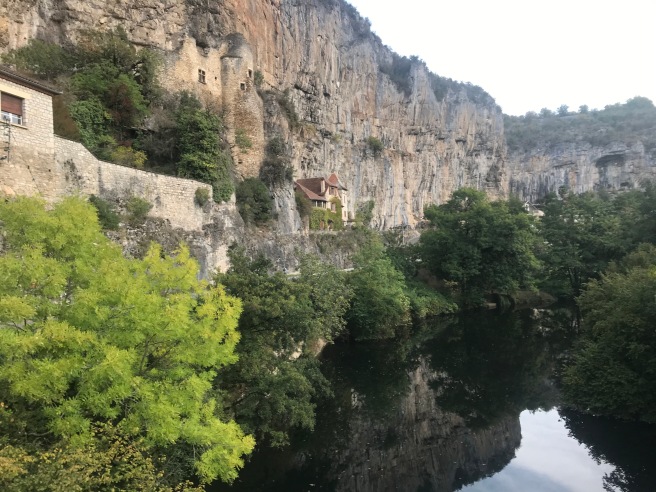 From Marchillac, up and over the ridge between the Cele and Lot and down to Cajarc, a fairly big town. I never could find a grocery there, but did find a pastry shop and got sandwiches, water and an Orangina.

Then it was back to my hotel near St Cirq along the Lot, but on the south side, the lesser travelled side. Past the castle at Cenevieres and then along the really, really quiet and beautiful D8 back to my hotel. I think this loop ride is the best one-day option.

Day 2: The ride to Figeac. I opted for the Cele route, but going via the Lot would have been just as nice. One advantage to this route: You don’t have to go up and over and down a ridge to get to Figeac. You do on the Lot route.

Day 3: From Figeac I headed out of town on the D662 and up to the picturesque little town of Faycelles. Here’s the view…

Then it was down to the Lot and Cajarc on the north side. The cliffs were to my right, as were the old railroad tracks, including several abandoned tunnels dug out of the cliffs the trains used to go through. One was at least a kilometer long. Most of this road, still the D662, was low and along the river.

At Cajarc, I went back to the pastry shop and stocked up (two sandwiches). Then I crossed the river and headed back toward Figeac on the south side of the river. After five quiet Ks, it was time to climb about 5 Ks to the view at Saut de la Mounine. It was well worth the climb. A big portion of this ride along the D86 was up higher with views down to the Lot.

At some point, I had to cross back over and go up and over the ridge to get to Figeac. I crossed on the D822 and then rode back up to Faycelles … and had my second sandwich. Then it was a long, long downhill all the way back to Figeac.

Tomorrow (finally): I’m headed north to the Dordogne. Let’s see how this river compares to the Lot and Cele. It’s definitely more famous. 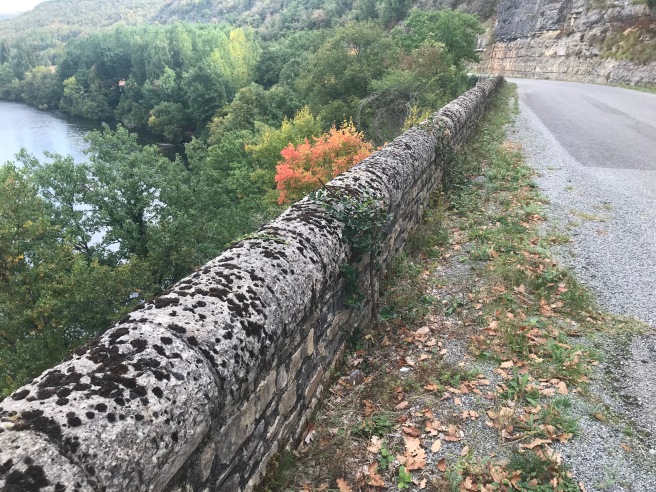