I’m back in Paris, sitting in my hotel room (the Hotel Saint Jacques on the Rue des Ecoles) and …

It’s raining, I’m sipping some tea … and a little sad all the cycling in Bordeaux is over: 1,048 miles in 20 days. Time to get a little reflective and try to sum up my 20-day journey.

First: The Plan Turned Out to be the Plan

On all of my previous French bike trips, the actual route changed significantly from the original plan. Not so much this time. Perhaps I‘m getting better at the whole planning thing, perhaps the internet makes it easier. Maybe both.

I did a lot of studying of my Michelin map, and once I was here … it all seemed familiar. The rides I imagined in my head … were pretty much the rides I actually did. The biggest surprise was how extensive the bike-path network is, especially along the Atlantic Ocean. And so, I added a few more bike-path rides along the ocean.

Yeah, I know this is obvious … it’s Bordeaux. The name of a very famous kind of wine. So, you kind of expect to see a lot of vineyards. But they were everywhere and stretched on endlessly, for miles and miles. I could (and did) ride all day among vineyards. It’s hard to grasp, in advance, the enormity of it and how all-consuming the wine making is around here.

They make about 1 billion bottles of Bordeaux wine year. A billion.

And, for the most part, the vines grow in perfect and picturesque straight lines, often on hills. And they often surround beautiful wine-tasting chateaux.

Next: All that Sand

Can’t stop thinking about the Dune du Pilat, the immense sand dune just south of Arcachon. It’s one of the coolest things I saw on this trip, or any other French bike trip. 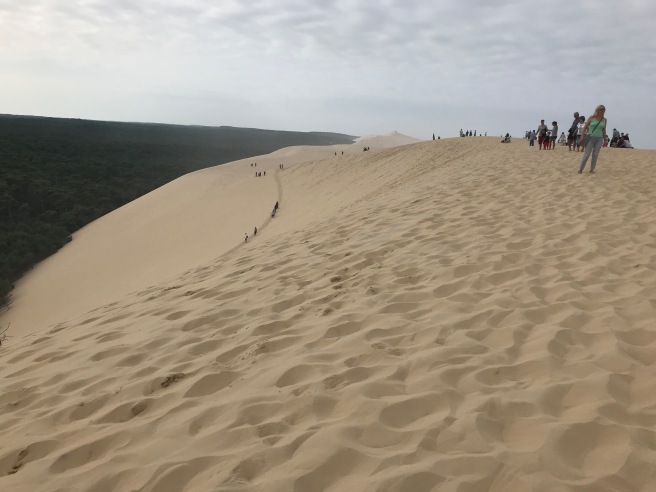 It just rises up from the sea, a couple hundred feet high, and stretches along the water for a few miles. It really is a mountain of sand and hundreds of people come to climb to the top and marvel at the dune … and the view.

I think I still have some sand from the Dune du Pilat in my ears … and in my shoes and panniers.

Four: All Those Bikes

There were so many other cyclists. People touring, commuting, doing errands, just out for the day on their bike with a bunch of friends.

In Bordeaux, there were a lot of organized tour groups, including some people on eBikes. At first, the bike snob in me thought: “An eBike, that doesn’t count. That’s not really riding.”

Then I calmed down and thought: “What the heck. Anything that gets people out and about on a bike is a good thing. And there are a lot of hills around here. For many of these people, a eBike is their only biking option and without one they couldn’t tour Bordeaux.”

Along the coast, there seemed to be more (hundreds!) of self-supported cyclists. Lots of couples and small groups.

I don’t think I realized how many people come here to bike. Seemed like there were a lot of people from England and Germany. And the United States. Hopefully this will help the sales of my upcoming eBook: Biking Bordeaux and the Arcachon Coast: The Vineyards, the Villages, the Beaches and Best Routes.

I know I may be a little overly fascinated with all-things plumbing, but hey … I’m traveling by myself and need a little amusement.

Found something unique in a pizza restaurant in Arcachon: An infamous and rarely seen sink-toilet.

Yep, a combination sink and toilet all in one. What a space saver. The sink sits atop the toilet which is quite amusing … and totally gross. I mean, come on, people just did their business (after eating lots if pizza and drinking gallons of wine) inches away from where you want me to wash my hands?

I don’t think so.

Sometimes the more sanitary thing to do is to not wash your hands. Unless, of course, you’re an employee of the pizza restaurant.

Me and the Cube … what a team.

Renting a bike can be an iffy proposition, and, over the years, I’ve ridden a few clunkers. And had problems.

Not this time. Thanks, Norbert and Jonathan at 02Cycles. 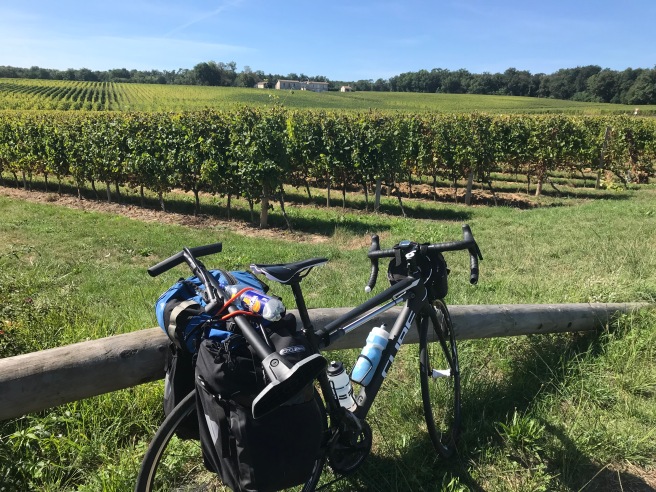 My Cube (A German-made bike) was great. It’s an all-carbon and fast bike. Ordinarily, you can’t attach a rack to an all-carbon bike … but they were able to do so on my Cube. I put a pannier on either side, my knapsack and bike pump on top, used a bungee cord to tie it all together and … voila … off I went. No problem.

When I stayed in a town/hotel for multiple days and did day trips without all my stuff … it was like I was 30 pounds lighter and pretty much flew up and down the hills.

One thing I have to admit: I discovered this morning, after I’d already returned my Cube yesterday in Bordeaux, that the lock the guys gave me, was in my handlebar bag. I forgot to return it. Sorry Norbert and Jonathan.

One of the only disappointing things on this trip were the towns/cities where I stayed.

With the exception of St-Emilion, which was an amazing medieval town, with everything you expect and deserve in a medieval town, all the other towns were kind of so-so. More working towns with a few interesting sights, but without much of a wow factor.

The other exceptions were the beach towns: Lacanua-Ocean and Arcachon, which were right on the beach and have all the amenities you’d expect at a beach-resort town.

No problem. As long as I had a decent hotel, a few restaurant options … and plenty of places to ride, a town is a town is a town. With the exception of St-Emilion. Now that’s a town.

I debated long on hard about whether to explore Bordeaux or the Dordogne on this trip.

I’ve ridden in the Dordogne before. Twice. Once on my own, once with Susan. It’s great and has a lot more tourist “attractions” and famous cities than Bordeaux.

But I wanted to ride someplace new. And ride I did. A total of 1,048 miles. The riding in Bordeaux is great. And I loved the combination of bike paths and rural roads.

I would definitely recommend this as a bike-touring destination for anyone and everyone who loves cycling, wine and the beach.

OK, Susan gets here tomorrow. Then it’s on to Provence. Stay tuned.

Typical Alp road … not bad!
On the way up the Col de Romme
Another great day of cycling in the Alps
The cycling in and above Annecy is kind of spectacular
Elvis is in Glasgow!
Waterfall near Kinlochleven #contoursholidays

Typical Alp road … not bad!
On the way up the Col de Romme
Another great day of cycling in the Alps
The cycling in and above Annecy is kind of spectacular
Elvis is in Glasgow!
Waterfall near Kinlochleven #contoursholidays
Loading Comments...
%d bloggers like this: