As a special bonus to all you Biking France Blog regulars, here’s Chapter 1.

You have to start a book about cycling in Provence in Bedoin.

Imagine a warm, sunny Saturday or Sunday in July, August or September. And then picture hundreds of cyclists. I’m not exaggerating. Hundreds, maybe a thousand or more attempt the climb on summer Saturdays and Sundays. For real. All these riders are on expensive road bikes, on some hybrids, a few mountain bikes and a growing number of electric bikes. Cyclists of almost every age, shape and pedaling prowess begin their journey at the traffic circle in the middle of town, where the sign says it’s 22 kilometers to “Le Mt Ventoux.” Cyclists are everywhere. 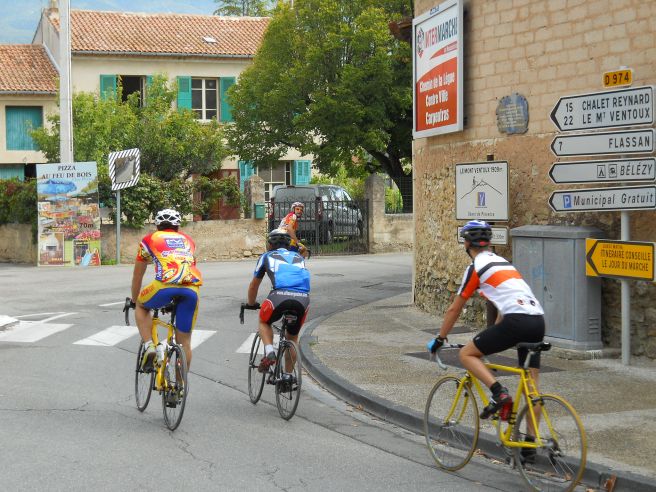 And they’re all here to tackle what French philosopher and bike-racing fan Roland Barthes called “a god of Evil, to which sacrifices must be made. It never forgives weakness and extracts an unfair tribute of suffering.”

Roland may have been a little overly dramatic, for literary effect. Then again, Lance Armstrong called it the toughest climb in all the Tour de France and said of the final six kilometers: “There’s no air, there’s no oxygen. There’s no vegetation, there’s no life, just rocks. Any other climb there’s vegetation, grass and trees. Not there on the Ventoux. It’s more like the moon than a mountain.”

And now, imagine climbing the Ventoux without the aid of banned substances.

But you can do it.

Bedoin: It’s a medium-sized and somewhat nondescript town whose primary purpose seems to be to serve as the launching point for climbs up the Ventoux. The Bedoin ascent is considered the “classic” route up the Ventoux. It’s the hardest of the three, a little tougher than the Malaucene climb, and the route that’s used whenever the Ventoux is included in the Tour de France every few years.

There are lots of cafes and restaurants, and a large supermarket.

Bikes: There are three bike rental shops, all located near the traffic circle in the center of town that’s the start of the climb to the summit.

On this most recent trip, I rented a bike from Bedoin Location. It was the end of September, so I didn’t book in advance, and there were plenty of bikes. If you go in July or August, book online in advance.

Rented an all-carbon Look bike that was very nice, and kind of expensive: 130 Euros for four days. The shop had electric bikes (eBikes) and we got one for Susan (my wife). Let’s just say Susan isn’t as much of a cycling enthusiast as her husband. For example, the Gorges de la Nesque out-and-back climb isn’t a ride she’d enjoy on a “regular” bike. Susan did the Nesque rather easily and had a great time on her eBike.

And yes, I admit it: I’m a bit of a bike snob, and never considered the possibility of renting an eBike. It doesn’t seem right, right? It’s cheating. But it’s the great equalizer when one member of a marriage (or group) isn’t as much of a bike fanatic as the other(s). If it gets more people on bikes and touring France, what the heck. Why not?

Susan: “The eBike is what you want your ride to always be like. Every time you turn the pedal the bike moves forward in a significant way. And it keeps propelling you forward. It’s the way I always wanted to ride. Every pedal has power. Especially when I’m in Wonder Woman mode.”

Her eBike had three settings: Echo, Normal and Sport. They give you progressively more power, and Susan likes to call the Sport setting her Wonder Woman setting. It was, and a few times I had trouble staying on her wheel on the way up the Gorges de la Nesque.

FYI: Susan didn’t attempt the Ventoux, on her eBike, and drove up in a rental car.

Hotels: There are a couple of hotels in Bedoin, as well as some chamber d’hautes (bed & breakfast places). I’ve stayed at L’Escape in the center of town a couple of times and it’s fine. And has a restaurant. We prefer to stay about four kilometers up the road, the D974 Ventoux road, in the little village of Sainte-Colombe at the Hotel La Garance. It’s a great hotel. The staff are very friendly, you can hang out in the lobby or by the pool after a ride and meet the other cyclists staying there.

You can see the Ventoux from the pool … and out the window of our room.

We stayed five nights, and it was 85 Euros a night.

The Hotel La Garance is a great place to stay, but only if you have a car, as Bedoin is four kilometers down the hill.

If you want to splurge, consider staying in Crillon-le-Brave, which is about three kilometers southwest of Bedoin. It’s an old stone town on top of a hill, and there are three very expensive, hotels in town: Hotel Crillon le Brave, Amiradou and La Maison de Crillon.

Pizza: There are several pizza places in Bedoin. It seems we cyclists love pizza. I know I do. We met a guy at our hotel, the leader of La Vie en Velo, a British cycling tour company. He told us the pizza at Pizza Paradiso was the best in town. By far. It’s located right next to the L’Escape hotel. And is kind of a charming hole in the wall. The pizza was excellent.

The Ventoux Ride: The world record for the Bedoin route is 55:51 minutes and was set by pro cyclist Iban Mayo in 2004. That’s an average speed of 14.3 miles per hour. That’s fast. Really fast. You won’t be going nearly this fast. My fastest time was a little under 2 hours, back in 2010.

The average gradient for the 21.5 kilometers is: 7.5 percent.

The first few kilometers are actually kind of easy. Then, you make a left turn into the forest and … bam! … 8.5-percent for a kilometer, followed by 10.0, 10.5, 9.5 and another 9.5. It’s through the forest, without much of a view, other than pine trees. There are a couple of s-curves, but it’s mostly pretty darn straight.

After 15 or 16 kilometers, you emerge from the forest, at Chalet Reynard, which is a café. And there it is, the moon-like geography of the Ventoux summit. No trees. Nothing but rocks. And climbing. You can see the top, which makes the final 6 kilometers look harder than they actually are. Instead of the 9-percent and 10-percent gradients of the past 10 kilometers, it’s “only” 7-percent and 8-percent. Then again, you’re out in the open, navigating some sharp turns … and there’s wind.

The final 6 kilometers seem to stretch on and on. And then, finally, you’re at the summit.

Warning: As you approach the last couple hundred meters, you make a sharp turn to the right. And the gradient suddenly gets a lot tougher for the final 100 meters.

And then you’re there.

At the top of Mont Ventoux.

Day Trips: Bedoin is a great launching pad for lots of day trips. I’m going to limit myself to three, with a few more from Malaucene and Sault.

Gorges de la Nesque: This loop is all about the stunning Gorges des la Nesque. A gorge – or canyon – is basically a long, narrow valley with steep, rocky, cliffs rising up from the stream, creek or river that created it over the course of millions and millions of years. Whenever I get to the Gorges des la Nesque, I think of an episode of The Flintstones, the one where Fred and Barney are walking by a little creek in the midst of this large, flat plain and there’s a sign that reads: Grand Canyon.

Here’s what I wrote about the Gorges des la Nesque in my journal after my first ride in 1995: “It’s so amazing it actually brings a smile to your face. You are riding along and realize you’re grinning because it’s so beautiful.”

From Bedoin, you want to head to the town of Villes-sur-Auzon. There are several options, but the quickest (11 kilometers) is to take the D213 to Flassan and then the D19 to Villes-sur-Auzon.

From here, you’ll see signs for the D942 and the Gorges de la Nesque. After about four kilometers of gentle climbing, you’re in the midst of the gorge, with great views down and out and all around. And then, well, you just keep on pedaling, kilometer after kilometer through the gorge and then through a couple of tunnels dug out from the rocky cliffs. You’re in the gorge for about 15 kilometers. 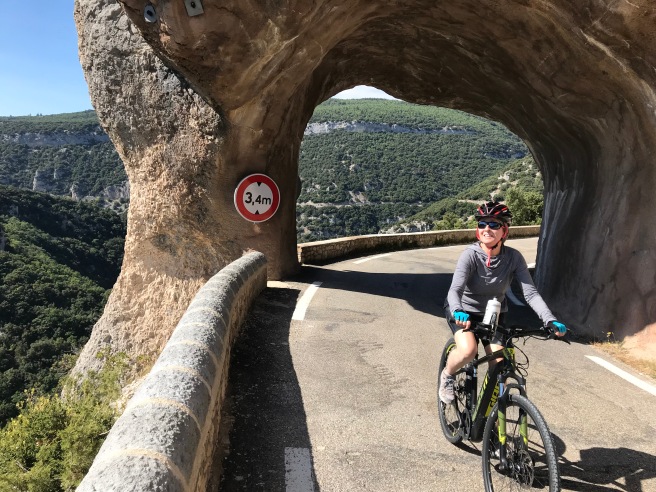 You can turn around at any point, or go all the way to Monieux or Sault and then turn around and ride back the way you came and see the gorge from the opposite direction. There are plenty of places to eat and drink in Sault, and also a grocery store in the middle of town.

Another – and longer – Gorges de la Nesque option: From Monieux, instead of heading back along the gorge on the D942, take the D96, which eventually becomes the D5, to Methamis. On this route, you’re on the opposite side of the gorge.

You don’t get a view down to the Nesque River, but the ride and landscape on this side of the gorge is nevertheless excellent. There’s a climb up (of course) and then down to Methamis. Because this is such a small, little-traveled road, there’s no real guardrail – and a few sections where the gravely edge of the road meets the start of the long, steep drop down to death. It’s a little scary. Even though there’s a couple of feet between you and plunging, it seems like you’re teetering on the edge of the cliff. At least it did for me. Since there wasn’t any traffic, I rode in the middle of the road – and felt much better.

From Methamis, head over to Mormoiron and then back to Bedoin. This ride is about 50 miles if you go all the way to Sault, and about 5 miles less if you head back from Monieux.

One more option: From Sault, climb the Ventoux! And then ride back down to Bedoin. Doing the Ventoux and Gorges de la Nesque in one day makes this a double epic ride. It’s about 55 miles.

The Venesque Loop: I really like Venesque: a stone village with a cathedral and the ruins of a once-mighty castle perched way up on a cliff. You could make this your base for the Ventoux, although it adds another 20 miles or so to the Ventoux and Nesque rides (which isn’t necessarily a bad thing). There are two hotels in town and a few B&Bs in Venesque. There’s just enough here for a two or three day stay. And plenty of rides.

There are a lot of ways to get to Venesque from Bedoin. Here’s one: Head over to Crillon-le-Brave, then Mazan and Malemort, and take the D77 to the D4 and into Venesque. You can climb up on the D4 into town, but the more scenic route is around the back on the D247.

There are a few restaurants and cafes in town, as well as the cathedral and castle. And great views back the way you came, and of the Ventoux.

The ride to Venesque and back is about 30 to 35 miles, depending on your route.

One thought on “My New & Updated Biking Provence eBook is Done! Here’s Chapter 1…”